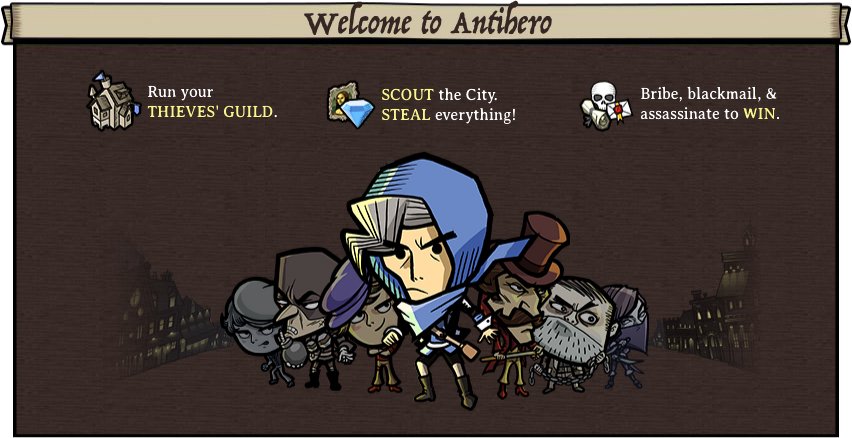 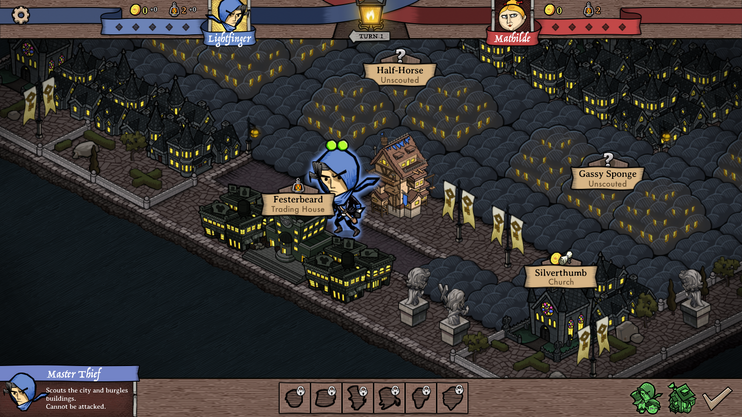 The start of every match looks something like this. The oversized character in blue is the Master Thief. Behind him is his home to where he returns at the end of every round along with all single-use Units.

All the name tags are the names of every group of houses. Each block contains one or more house-holds and only one special building, like a church, trading house etc. that can be used more extensibly. More on this later.

At the top of the screen is your and your enemy's economy of three resources: gold coins, lanterns and victory points. Gold coins and lanterns can be gained every turn, the turn based income is depicted by the small +0. Victory points do not ave a turn based income, you must work hard to gain those for having filled all point-slots on your blue ribbon wins you the game.

The bottom left tells us a bit about the currently selected unit or building. The bottom center is where Master thief hires units to aid in his/her quest to victory. The bottom right has three buttons: the first from the left is green if there are things left to do this turn, the second leads to the upgrade screen which will be brought up later, and the last button is used to make it the enemy's turn for game progression. 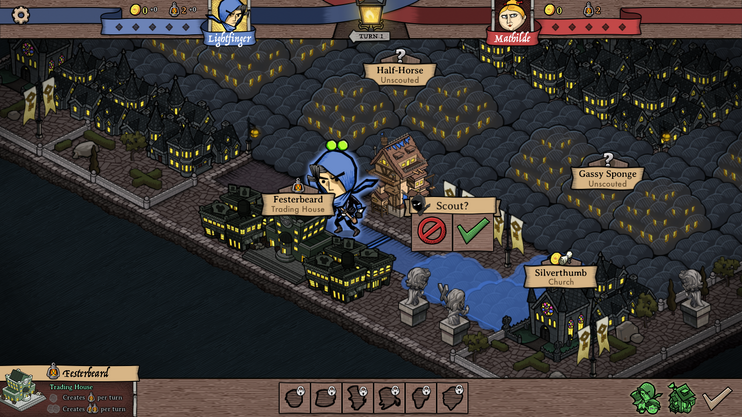 Onto game-play: Master Thief scouts fogged terrain by walking to a fogged space. A maximum of three spaces can be scouted in one move. 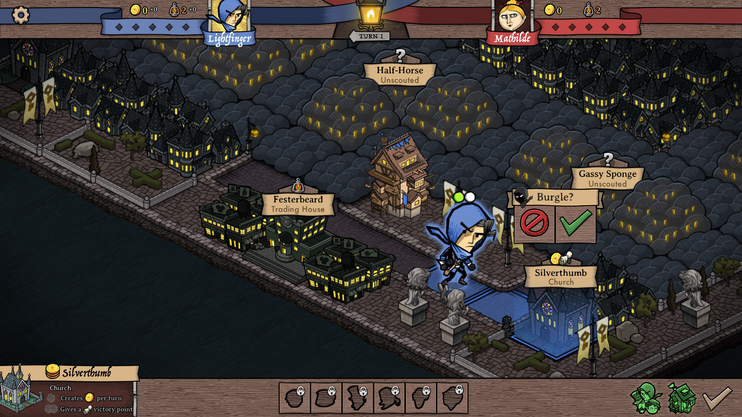 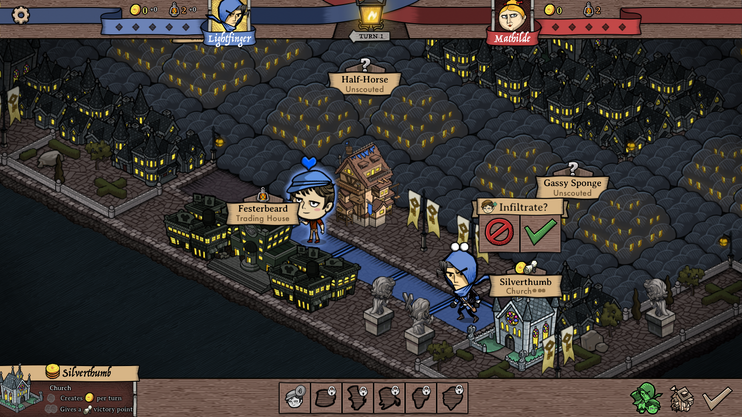 The new character with a blue beret is an urchin. They infiltrate building of importance to gain over time bonuses like income each round or a cost reduction to hiring eg. more urchins. In the bottom left of the screen shows the bonus(es) from having infiltrated the selected building. The bonuses for infiltrating a church is one extra gold per round. If the church is infiltrated with a total of three urchins, a victory point will be acquired as long they are not [evict]ed. 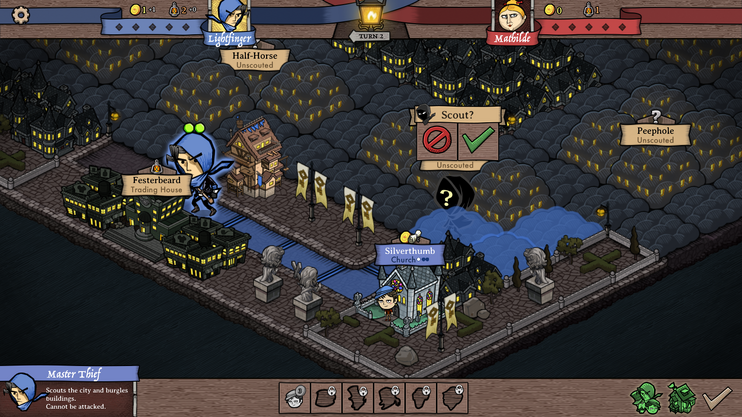 There are enemies and neutrals in this game, This is what they look like when they are still in a fogged space. Fogged enemies/neutrals must be scouted to be interacted with. 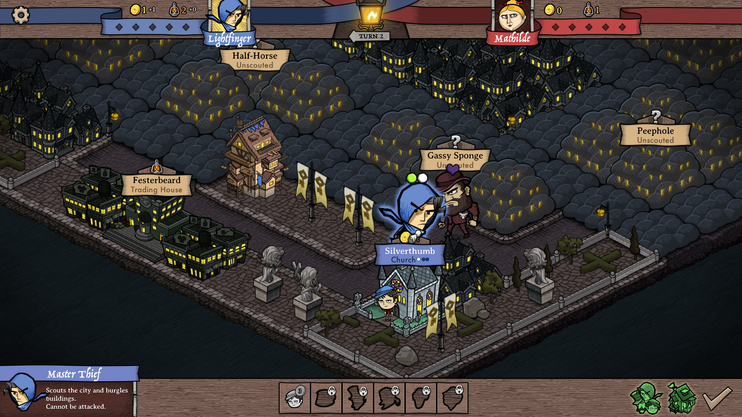 Having scouted the space of the mysterious person reveals them as a neutral. Neutrals block you and your enemy's path and, since these neutrals don't move(with one assassinate), they must be killed to be walked past. 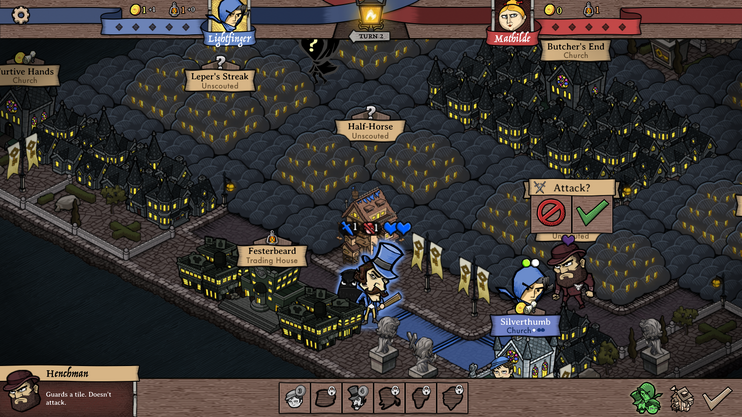 One of a few ways to kill is to use a [gang]. A gang can be issued to attack an enemy/neutral or evict urchins from a building. The gang is a multiple use Units and will not return to Master Thief's home at the end of the turn and will be susceptible to enemy attacks but will also block their path. 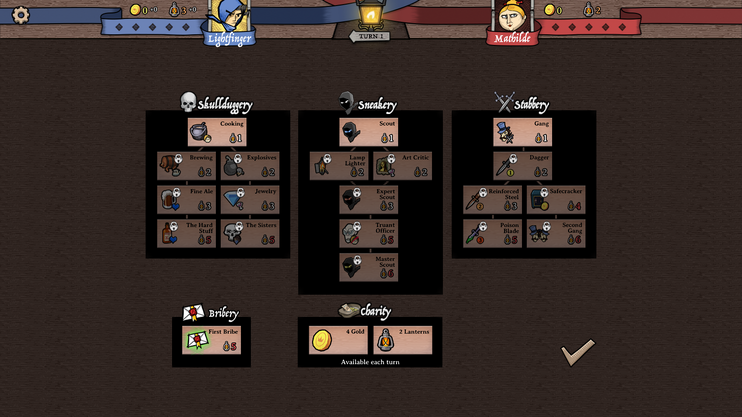 This here is the upgrade screen, the one accessible from the middle button in the bottom right(not visible in this picture). Here you can upgrade Master Thief, gain the ability to hire units(accessible under skullduggery,sneakery and stabbery), get gold or lanterns for free(charity) or bribe someone for a victory point(bribery). multiple upgrades can be bought on the same turn for an increase in price, bribery is affected by this too. One can however not by anything and ask for charity in the same turn, so spend your turns wisely.

We touched on the subject of this third resource some time ago. Victory points are collected through many different means, some of which are exclusive to the current map. The picture features three victory points you will be sure to encounter.

Going from the left: the first is gained by infiltrating a church with three urchins, be warned this victory point can be lost if one or more of your urchins are evicted from the church

The second victory point is the bribery, the price of bribing increases by 2 lanterns per bribe bought independent of who bought it and which turn

The third victory point is an assassination, they are gained by killing a neutral with that skull-symbol by their health indicator. 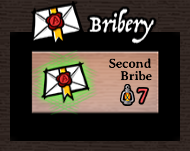 Featured are the sources for the three victory points featured earlier.

Any of these three victory points can be gained multiple times by simply infiltrating another church or assassinating another target as it appears.

Not everything has been covered in this tutorial, the technology tree was barely touched, but enough to jump into a skirmish/online game and be able to win using the in-game tool-tips as a guide. Good luck and have fun!